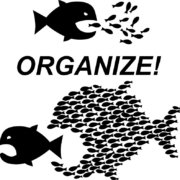 This skyrocketing inequality is the result of a loss of bargaining power and the erosion of workers’ ability to exercise their rights on the job. Since the early 1980s, the overall rate of unionization has declined in half. That decline creates problems for all workers—union members consistently earn more than their non-union counterparts, but research by the Economic Policy Institute shows that higher union density increases wages for all workers.

The PRO Act:
 Enacts meaningful penalties for violations of workers’ rights: The current penalty under the National Labor Relations Act (NLRA) for wrongfully firing a worker is back wages minus any wages earned in the interim. The PRO Act would authorize monetary penalties and would create a private right of action for workers whose rights were violated to seek justice.

 Ends undemocratic “captive audience” meetings: Companies routinely hold mandatory meetings on work time in which executives and anti-union consultants threaten and intimidate workers seeking to organize into opposing a union—a practice that is generally completely legal. The PRO Act would ban these undemocratic meetings and would ensure that union representational elections are held in a timely and fair way.

 Strengthens workers’ ability to stand in solidarity: The PRO Act would remove prohibitions on workers standing together to protect all workers’ rights. Specifically, it would allow workers to engage in peaceful protest with workers at other companies. It would also prevent companies from permanently replacing workers who have gone on strike, a practice that makes it extremely difficult for workers to strike.

 Helps workers who have organized get a fair first contract: Nearly half of newly formed unions fail to ever reach a first contract with an employer because companies will simply refuse to negotiate in good faith. The PRO Act would remedy this issue and facilitate first contracts by creating a process of mediation and arbitration to resolve disputes.
Please co-sponsor H.R. 2474/S. 1306, the Protecting the Right to Organize Act!